Paul on Trial in Jerusalem

This week’s virtual Bible Study focused on Acts 22.  After praying and reading through the chapters, we discussed the verses at length, and shared our personal views on what we had read.

Verse 1:  Paul still speaks with respect to his captors although he has been beaten and was probably in severe pain.

Verse 4: The term “this way” refers to Christians; this was the name by which they were called at the time.

Verse 6: Paul is giving his testimony, spending the majority of the time reflecting on how Jesus had saved him.

Verse 10: Paul was not given the full idea of what he was being called to do, but he obeyed the Lord’s called regardless of that. We must also do the same. We are not always going to know exactly what God has ahead for us, but we must be prepared to answer his call in obedience, knowing that He has a plan for each of our lives.

Verse 15: As Christians, we are called to witness to others, to be witnesses for Christ, not judges. Scripture reminds us of this repeatedly. It is not our job to judge others; that job belongs to God. (Ref. Matthew 7: 1-5).

Verses 18-19: Paul thought that he would begin his witnessing in Jerusalem, but the Lord sent him instead to witness to the Gentiles. The Lord, in all His wisdom, foreknew that Paul’s own people would not accept his testimony.

Verse 22: The crowd begins to call for Paul to be killed as soon as he mentioned the word “Gentiles”.

Verse 24: The captain commanded that Paul was to be scourged just as Jesus was. Scourging meant being beaten with whips while being intensely questioned, and the more quiet one remained during this process is the more beating they received.

Verse 28: If we know who we are, we can declare this without hesitation, just as Paul did. Paul knew the laws of the country that he was in, and knew how to declare and claim his rights at the appropriate time. While Paul was referring to his physical state of being born free, there is also a spiritual message within this verse. By knowing who we are in the Lord, we can chase back the forces of hell.

Paul is Beaten and on Trial in Jerusalem 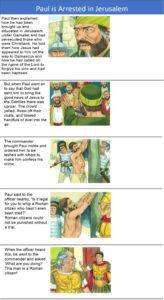 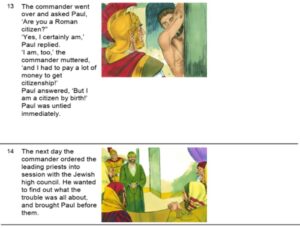