Paul Goes Before Felix the Governor

This week’s virtual Bible Study focused on Acts 24.  After praying and reading through the chapters, we discussed the verses at length, and shared our personal views on what we had read.

Historical Information: Felix was a slave who entered into politics because his brother was a friend of Nero, the well known, cruel Roman Emperor.

Verse 1:  Paul is in Caesarea, waiting for his accusers to arrive from Jerusalem.

Verse 3: Tertullus begins to flatter Felix prior to explaining his case against Paul.

Verse 10: Paul speaks to defend himself with the Holy Spirit as his guide.

Verse 16: Paul makes a very important statement on character.  A clear conscience was vital to his existence, he mentions his conscience about 29 times throughout the New Testament.

Verse 18-21: Paul informs Felix that his accusers were not present; once again Paul knew his rights; Roman law stated that the accused must stand before his accusers. He also reiterates that his only “crime” was speaking out about the resurrection.

Verse 22: Felix had more knowledge than most about the followers of Christ. In fear, he deferred the matter rather than making a decision.

Verses 24-25: Felix had already been exposed to the Gospel (we know this from verse 22) He was reasoning with Paul about righteousness, self control and the judgment to come- three important discussions that we must also have with ourselves about our own lives. Sadly, Felix put off the most important decision of his life, his salvation. He was convicted during the discussion with Paul, but just as he had before, he acted out of fear, and deferred his decision making once again.

Verse 27: Felix was playing both sides. When we continually procrastinate, we eventually lose the right to make a decision. It is important that we make decisions in a timely fashion; especially where our faith and salvation are concerned.

Paul Goes Before Felix the Governor 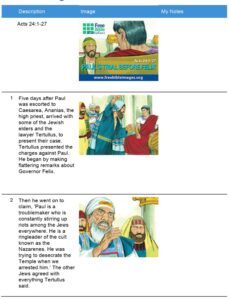 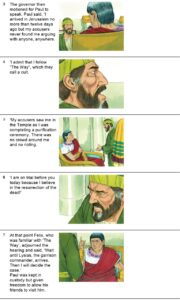 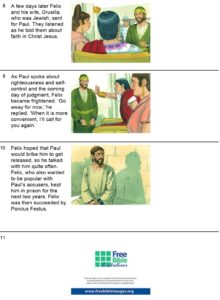