Paul and Silas are joined by Luke & Timothy

This week’s virtual Bible Study focused on Acts 16.  After praying and reading through the chapters, we discussed the verses at length, and shared our personal views on what we had read.

Paul and Silas are once again in Lystra, the same city where Paul was stoned and left for dead. They are now joined on their missionary journey by Luke and a young man named Timothy, who is highly regarded by Paul. We are told that he is of good character, and we believe he is about 18 or 19 years old. They all travel on together to Macedonia.

Verse 3: Paul has Timothy circumcised, this was a compromise in order to further the spread of the Gospel, and must also have been a large compromise for Timothy, as this would have been a physically painful process for him.

Knowing and Being Obedient to the Spirit of God:

Verse 6-7: Paul knew the Spirit of God intimately, and knew that the Lord was forbidding them from going into a particular area to preach. It is important to recognize when God is closing a door, and to yield to His perfect will instead of pushing against the door, which could lead to us entering into God’s permissive will. When we are in God’s perfect will, it does not mean that everything will go perfectly. It does mean, however, that we will have God’s perfect peace despite our trials and tribulations. You will still have joy, even though there may be no visible earthly reason for that joy.

Verse 9: Paul has a vision and recognizes that the Lord wants them to go to Macedonia to preach the Gospel there.

Verse 17: A slave girl begins following the Apostles around, uttering what sounded like a Christ filled message. Although she spoke Biblical truth, Paul’s strong knowledge of the Holy Spirit made him aware that the girl was not a believer, and was actually possessed by a demonic spirit.

Praising God Despite our Earthly Circumstances

Paul and Silas were imprisoned with their feet locked in heavy wooden restraints, but nonetheless, they were singing and praising God. They displayed no anger, and did not question their circumstances. Their praise was so powerful that it broke those prison walls- a mighty earthquake shook the very foundation of the prison and all the prisoners’ restraints were loosened.  It is important to remember that “Your attitude dictates your altitude”, and God loves a prayerful, praised filled heart. Remember: “if God is for us, who can be against us” (Romans 8:31)?

Paul and Silas’ test in prison led to a powerful testimony, and brought more unbelievers into belief in Christ. The same is true for us, our greatest test is an opportunity to show the power of God, and to be a testimony to His greatness, faithfulness and grace.

Admitting Fault, and Strength of Character:

Verse 36: The Magistrates who had wrongly imprisoned Paul and Silas attempted to quietly release them, and send them on their way, but Paul’s strength of character and sense of justice made him insist on a public acknowledgement of guilt from the Magistrates, although that meant remaining in their custody until that could be achieved.  The lesson for us is that when we have publicly wronged someone, we must be prepared to publicly apologize and set the record straight. Remember: “…the righteous are as bold as a lion”(Proverbs 28:1).

As you read, ask yourself: What are MY thoughts on what I am reading?

Acts 16: Paul and Silas are Jailed 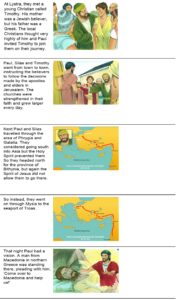 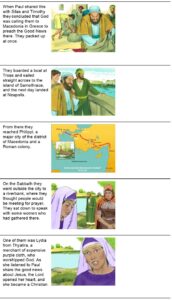 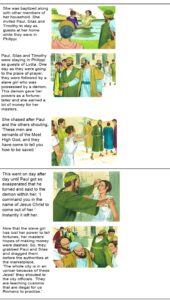 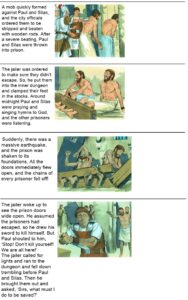 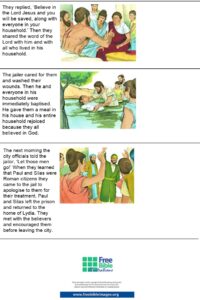