This week’s virtual Bible Study focused on Acts 19.  After praying and reading through the chapters, we discussed the verses at length, and shared our personal views on what we had read.

Verses 2-7: Without the indwelling of the Holy Spirit, true salvation does not exist.

Paul encountered disciples who had gaps in their knowledge of Christ and the Word; they were unaware of the existence of the Holy Spirit, and therefore the power necessary for living righteously and for boldly declaring Christ was missing. He began to teach these men, and baptized them in the name of the Lord Jesus. They began to speak in tongues, and prophesied.

Verse 9: The hearts of many of the unbelievers were hardened, and they began to speak evil of the Gospel.

Paul recognized that his efforts were fruitless and that it was time to move on. He had learned well from his prior experiences.

Hardened hearts will speak evil. We must therefore pray consistently to the Lord to keep our hearts softened and open to Him and to Truth.

(Ref. 1 Corinithians 16:9- Paul speaks of his experience in Ephesus)

Verse 12: The handkerchiefs referred to in this verse actually refer to what we would call sweatbands, usually worn on the head or around the neck.

Verse 16: Power without character is dangerous.

Some exorcists, who had witnessed Paul’s genuine God granted power, began to call out evil spirits by fraudulently using Jesus’ name. They had no character or genuine God given power, however, so they were attacked by the evil spirits and were forced to run for their lives.

The Holy Spirit is our only deliverer; we must therefore be careful what tasks we take on, as we can easily put ourselves and others in danger.

Verse 19:  Many who believed the Word publicly burned their ungodly items as a sign of their new faith and their commitment to Christ and the Gospel. We too must free ourselves of all things that are considered “magical”-things that are not of God- that we may once have believed in or held dear.

Verse 27: Demetrius warns the unbelievers that Paul is jeopardizing their goddess,  Diana. Any “god” that we as mere humans have to worry about protecting and keeping safe cannot be a true god. We do not have to defend our God, we only have to defend Truth.

Verse 32: Mob mentality- Many of the people in the crowd had no idea why they were even there. They were rioting just because they were stirred up to do so. We must be careful of blindly following the crowd. We should always check the facts for ourselves to be sure the cause at hand is a worthy, Godly one. 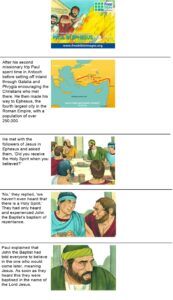 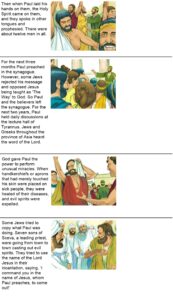 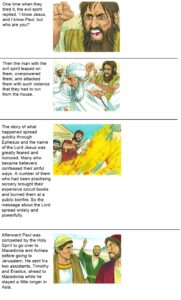 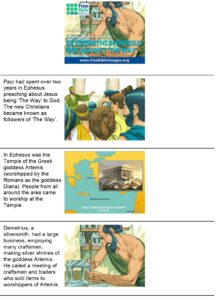 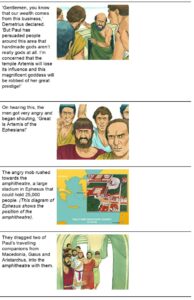 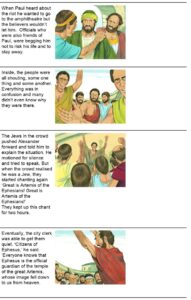 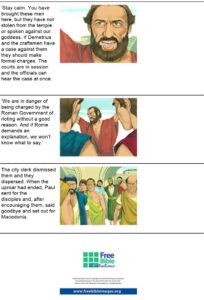