The Council of Jerusalem

This week’s virtual Bible Study focused on Acts 15.  After praying and reading through the chapters, we discussed the verses at length, and shared our personal views on what we had read.

The major themes in this week’s Bible Study were:

1. Conflict— Verse 1: “Certain men from Judea” (these men were not named) were preaching a false and  misleading message to the new believers, thereby creating conflict.

2. Legalism–Verse 5: The Pharisees who believed still held on to their legalistic views, insisting that  circumcision was necessary for the new believers. We are reminded in Verse 11 that it is by grace that we are saved, not by works or legalism.

3. Resolution— Verse 20: A compromise is reached; the new believers will not be required to be circumcised, but they are instructed to refrain from immorality of all types.

4. The Early Church–We see the development of the early church, and also see that conflict within the church is nothing new; it has existed since its earliest days.

5. Trust–Verse 38: Paul did not want John Mark to accompany them on the next mission as he apparently did not trust him since he had abandoned them on an earlier mission. Barnabas insisted that John Mark be included, however, and this led to a conflict between Paul and Barnabas which eventually caused them to go their separate ways.

Verse 39: Although the parting of Paul and Barnabas was disappointing, the story leading up to the parting contains important lessons for us to learn regarding conflict resolution. We are told that both men were firm in their positions, and clearly neither one would yield. In a disagreement, unless someone is willing to alter their position, it is unlikely that compromise can be reached.

We also talked about the power of words. Words can be either positive (Verse 32) or negative (Verse 24). Words must be used very carefully, for they have the power to build up people or to tear them down.

As you read, ask yourself: What are MY thoughts on what I am reading?

Acts 15: The Council of Jerusalem 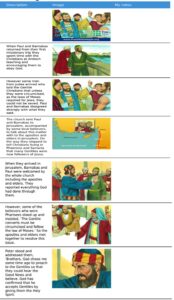 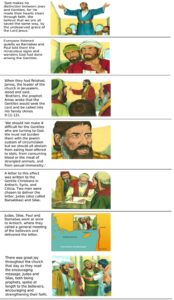 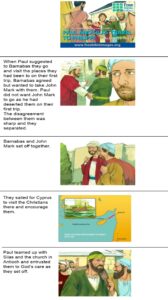