This week’s virtual Bible Study focused on Acts 26.  After praying and reading through the chapters, we discussed the verses at length, and shared our personal views on what we had read.

Verse 2: Although Paul has been in custody for 2 years, he states that he thinks of himself as being happy. He considered it a privilege to speak before King Agrippa who was an expert on Jewish matters.

Verse 5: Paul states that all the Jews know him and have known his character from way before his salvation, if they are willing to admit to this.

Verse 8: Paul questions why it should be impossible to believe that God raised the dead. Unfortunately, there are many Christians who have difficulty believing many of the truths of the Bible. If we are truly  children of God, however, we cannot pick and choose what to believe in His Holy Word.

Verses 13: Paul’s dedication (even prior to salvation) was so great that he did not take the customary midday break that many of his fellow Jews did.

Verse 14: It appears that God had nudged Paul a number of times prior to his encounter with the Lord on the road to Damascus. He mentions “goads” which refers to sticks sharpened at the end, used for prodding sheep. We are often also prodded by the Holy Spirit. We must examine ourselves carefully….Do we respond when nudged by the Holy Spirit?

Verse 17: Jesus promised to protect Paul from both the Jews and the Gentiles until the appointed time.

Verse 18: Paul refers to deliverance from both physical and spiritual darkness.

Verse 20:Works befitting Repentance- we must ensure that we are not merely repeating our sinful actions and continuously seeking repentance from the Lord for the same repeated sin.

Verse 27: Paul states that he thinks Agrippa believes the Prophets.

Verse 28: Was Agrippa sarcastic or sincere? This type of talk is very similar to what we hear today; it is typically followed by many excuses for why the person is not ready to accept Christ.

Verse 32:Agrippa/Festus could not change Paul’s appeal, it was not legally within their power to do so since he had appealed to Caesar. 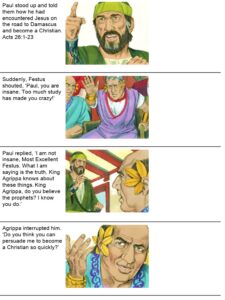 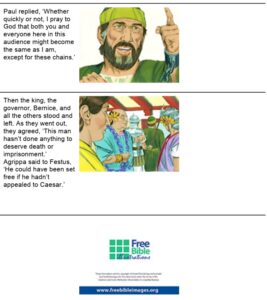